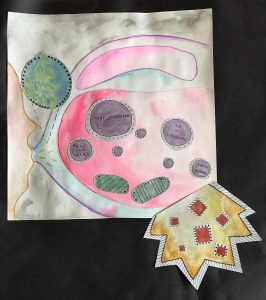 By: Anna Kardash and Grace Burrell

In our painting, we show a phagocytic cell in the form of a balloon. The person blowing up the balloon shows a potential site of an oral bacterial infection. In the case of a present infection, white blood cells, such as neutrophils, will swarm to the site to digest the pathogenic bacteria. The balloon presents as an enlarged phagocyte, where the balloon’s shadow is the nucleus. There is a receptor which notices the bacteria – the opening of the balloon. Once inside, the phagosome is formed – shown as small ovals in the bottom of the balloon. The lysosome – shown as the purple circles –   which is an organelle that contains digestive enzymes becomes attached to the phagosome to break down the bacteria in question. Once broken down, the pieces of debris – shown by the orange squares – are kicked out of the cell by exocytosis. This is represented by the bursting of the balloon letting the pieces of debris out in the bottom right hand corner of the painting.

White blood cells are cells in the immune system that play a role in defending the body against foreign invaders such as bacteria, viruses, and parasites. The two types of phagocytes are neutrophils and macrophages. Neutrophils are very phagocytic and can be described as bacterial slayers due to their hydrolytic enzymes and antimicrobial proteins; they also produce a much higher amount of ROS than macrophages do, so they are the primary line of defense. Macrophages develop from monocytes and are the chief phagocytic cells. These phagocytic white blood cells engulf bacteria and break them down using various mechanisms such as: NADPH Oxidase, Nitric Oxide + Citrulline, Myloperoxidase, and hydrogen peroxide/ OH radical.

Immunity is the active ability of a host to resist disease. The innate resistance makes up the non-specific ways that hosts can be protected from pathogens such as by physical barriers, natural host resistance, as well as tissue specificity. The innate system recognizes the pathogens exposed by the use of phagocytes. The phagocytes use Pathogen Associated Molecular Patterns (PAMPs) such as viral coat proteins, yeast cell walls, flagella, and the lipopolysaccharide layer of gram negative bacteria to recognize the pathogen. Upon interaction of the PAMPs, PRMs activate production of toxic oxygen species that can kill the pathogen, or limit its ability to harm the host. TH1 cells also play a role in recognition of pathogenic bacteria. When an antigen is present, TH1 cells are attracted to the site, where cytokines are released when the antigens are detected. The cytokines then activate macrophages and cause inflammation.

Neutrophils are produced in large quantities daily from the bone marrow then enter into the bloodstream where they function as “The Neighborhood Watch.’ Here, they respond immediately to oncoming invaders like bacteria as soon as they receive signals from either a damaged tissue or receptors. To kill bacteria, they can employ three different mechanisms: degranulation, NETosis, or phagocytosis (Rosales, 2018)–we will be referring to the process of phagocytosis. These white blood cells have azurophilic (primary) granules that contain neutral proteases such as cathepsin G, elastase, and proteinase 3 which aid in microbial killing and digestion (Segal, 2007), generally, by breaking down the thin cell membrane of the bacteria. The primary granule also contains an enzyme called myeloperoxidase (MPO) which produces hypohalous acids in order to carry out antimicrobial properties. The function of this enzyme is to oxidize chloride or other halides in order to make a hypohalous acid, such as hypochlorous acid, which is essentially bleach (Klebanoff et al. 2013). Once the bacteria has been engulfed by the phagocyte, a phagosome is created. Nicotinamide adenine dinucleotide phosphate (NADPH) Oxidase is an enzyme complex that can be found on the membrane of phagosomes used by the neutrophil in order to attack bacteria. This oxidase produces the superoxide anion, which is then turned into a multitude of other reactive oxygen species such as hydroxyl radicals and HOCL – essentially bleach. On a side note, there are some people who do not have functioning NADPH oxidase, which can be classified as a disease called Chronic Granulomatous Disease which results in recurrent infections (Nusse, 2011). The phagosome is then bound to a lysosome (which contains digestive enzymes), creating a phagolysosome. The combination of the phagolysosome’s low pH environment and proteolytic enzymes work together in order to digest the bacteria. Following this, the residue from the digested microbe will be transferred into a secretory vesicle that will transport the dead microbe by way of exocytosis. Once the neutrophils have completed their duty of eliminating the microbe, they themselves will be eliminated by way of macrophages.

Phagocytes are a key defender of our bodies. Without them, YOU would have bacteria.

Mechanisms of NADPH Oxidase Activation and Bacterial Resistance. Retrieved from

NÃ¼sse, Oliver. Biochemistry of the Phagosome: the Challenge to Study a Transient Organelle.

Rosales, C. (2018, February 20). Neutrophil: A Cell with Many Roles in Inflammation or Several

Neutrophils during Infection with the Intracellular Bacterial Pathogen Listeria