Emphysema is a respiratory condition and type of chronic obstructive pulmonary disease (COPD) that describes the rupture of alveoli walls and the resulting enlargement of these air sacs. The rupturing of the alveoli and enlargement of the air sacs in the lungs leads to much less surface area in the lungs to perform the exchange of gasses across the respiratory membrane. Without an appropriate amount of surface area in the lungs to oxygenate the blood, those with emphysema can experience frequent coughing and wheezing, shortness of breath, stridor, and chest tightness. This disease is one of the leading causes of death worldwide, and smoking cigarettes can greatly increase the chance that an individual will develop emphysema. At least 75 percent of people who have developed emphysema smoke or smoked previously in their lifetime.

Cigarette smoke is composed of many harmful chemicals, including carbon monoxide sulfur nitric oxide and methane, along with methyl chloride and chloroform to name a few. When the lung tissue is exposed to cigarette smoke and other particulates from smoking, it can cause the damage that leads to COPD. These particulates, for example, are carbon black, which is the product of an incomplete combustion of the tobacco in a cigarette. Carbon black is what causes the blackening of lungs, and can lead to lung cancer developing. These molecules of carbon black cause DNA in exposed cells to break, which causes the lungs to get inflamed and damaged. The damage even continues after this initial breakage, because following cell death, the particles of carbon black are released back into the lung tissue. This creates a cycle of lung damage that over time leads to the development of a chronic disease such as emphysema.

A chronic respiratory disease is certainly something that seems intimidating, and as such, numerous studies have focused on how the risk of developing emphysema changes if an individual stops smoking. Mostly, these studies have resulted in the finding that the risk is adjusted based on factors like how long someone smoked and the amount that they smoked. According to one study, the RR of COPD was reduced if someone did stop smoking, with variation based on some of those factors. In essence, emphysema cannot be reversed by not smoking, but the risk of developing emphysema because of smoking doesn’t diminish all together. These findings offer a strong argument for the modern movement to stop tobacco smoking.

The grapes that are painted represent the alveoli in the lungs, and the stems the bronchial tubes. Alveoli resemble grapes with their round, almost bubble-like shape and clustered arrangement. In this illustration, the stems on the grapes that attach groups of grapes represent the bronchioles and bronchi. In the bottom right edge of the grapes, there is a dark and open spot with rough edges. This represents the ruptured alveoli eventually forming bigger air sacs with much less surface area. This is similar to when grapes start to go bad, and the skin on them starts to wrinkle and change color. 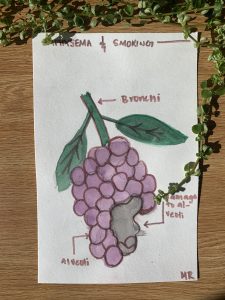