PCOS stands for polycystic ovarian syndrome and is characterized by prolonged menstrual periods, excess androgen (male hormone) levels, and weight gain among many other symptoms. Perhaps the most detrimental side effect of this disorder is the collection of many small follicles developed in the ovaries that impede the regular release of eggs. This causes the ovaries to enlarge and regularly develop one or more cysts that are very painful and often requite medical attention. All of this damage to the ovaries combined with the delay of releasing eggs causes infertility in many women with PCOS. It “[…] is the most common endocrinopathy affecting reproductive-aged women, with a prevalence of 5-10%,”  (Kahn, 2019). PCOS is also thought to be the cause of around 40% of female infertility, which is almost half of the population of women in the world. Because this disease is so varied and complex it is often hard to correctly diagnose due to overlapping symptoms.

There are many treatments today that help women deal with PCOS and all of the symptoms that come with it. This disorder also comes with a whole list of potential metabolic disorders like glucose intolerance and hepatic steatosis, which are caused by and fueled by PCOS, and is also the leading cause of endometrial carcinoma, which is a cancer that starts in the cells of the inner lining of the uterus (Kahn, 2019). One of the first things that doctors prescribe for women with PCOS is lifestyle changes, like diet and exercise. “Monitoring blood glucose, weight, blood pressure, smoking, alcohol, sleep, mental, emotional, and sexual health should be optimized in women with PCOS, to improve reproductive and obstetric outcomes,” (Costello, 2019). Eating healthy and exercising regularly is one way to alleviate the symptoms of PCOS, but it doesn’t completely take away the effects of PCOS, like infertility and ovarian cysts.

Women with PCOS can eat healthy and exercise, and monitor all of the factors mentioned above, but that still might not aid in the more important symptoms, like infertility and the excruciating ovarian cysts. For infertility, there are many treatments out there that have worked for some women, like gonadotrophin. Gonadotrophins are commonly used as a “[…] second line pharmaceutical agent in women with PCOS who have failed first line oral ovulation induction therapy,” (Costello, 2019). This medication improves the chance of getting pregnant by “[…] improving ovulation, optimizing mono follicular development, and increasing the amount of mature follicles,” (Costello, 2019). Many women chose this route because it is less invasive than other methods, but with this comes the fact that taking a pill is less effective than other methods that may require surgery or some type of procedure.

There is always the option of IVF/M, or in-vitro fertilization/maturation. This method consists of a freeze dried human menopausal gonadotrophin that has been extracted from the urine of post-menopausal woman. Explained above is the oral method of this hormone, but using this injection method of IVF/M introduces the treatment right at the source, to the ovaries and eggs. As explained more in depth, the “[…] natural cycle IVF combined with IVM (IVF/M) has shown that these enclosed, arrested oocytes can resume meiosis and complete maturation,” (Elshewy, 2020). This method has achieved higher implantation and pregnancy rates than any of the other methods mentioned above, and is therefore the most sought after treatment among women affected with PCOS. This method doesn’t always work, and some women are unfortunately left with not being able to conceive children.

Below is my digital drawing of a uterus showing a normal ovary and one affected by PCOS, showing the drastic difference. 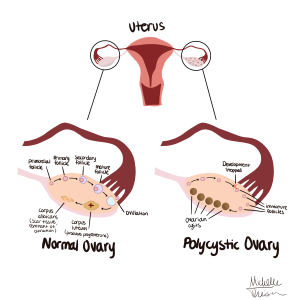