For my STEAM project, I decided to compare cancer and its unrelenting growth to the concept of love and its infinite ability to grow. In its simplest form, mitosis is a process that allows cells to reproduce and replace damaged or dead cells. Without it, every living organism would cease to exist. With it, every living organism simultaneously faces the reality of mitotic error and its consequences- cancer. The key idea of mitosis becoming a negative process in a certain cell is that when a cell has defects at one of the checkpoints (Levine et al.,2018). This could cause the cell to have aneuploidy, a characteristic of cancer that is present in 70% of human cancers, meaning that they have the wrong number of chromosomes (Levine et al.,2018). More specifically, one of the sources of aneuploidy is error at the spindle assembly checkpoint, where the spindle assembles and the cells are sure to check whether everything is paired properly (Funk et. al., 2016). Another example of a ca 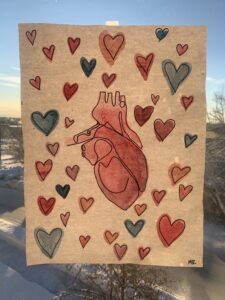 use of aneuploidy is lagging chromosomes, which is the event of some chromosome staying behind when the rest separate and go to each pole of thecell. This causes aneuploidy because it contributes to the rare occasion that all the chromatids don’t separate correctly during mitosis. While this explains the mechanism in which mitosis can go wrong, what could prompt these changes? Many factors can cause mitosis to cause aneuploidy in a cell. These include environmental factors such as asbestos and other carcinogens, and occasionally mutating genes (Hammerhoff, 2004).

These several errors in mitosis can lead to different outcomes in the cell, including cell death, disease, and unchecked/increased growth. The outcome of increased growth leads to what we understand as cancer (Thompson, 2020;Hammeroff, 2004). On a more positive and optimistic note, the understanding that scientific research possesses today gives us a bright outlook on making headway in the treatment of cancer. With the knowledge that the reason some cells become cancerous is due to mitotic error, we have the incredible ability to figure out treatments that are both less toxic and more effective at inhibiting mitosis that is heading in a dangerous direction.

The idea of unchecked growth in the body is paralleled in our societal idea of the concept of love. The moment I could understand her (and probably before that), my Mom instilled in me that your heart always has room for more love, more room for growth. No matter how much I grow as a person and no matter how much love I have for the people around me, there is always room for more. The painting shows an anatomical heart with many non anatomical hearts surrounding it. This ismeant to represent an unlimited amount of love flowing out of the heart. Although there is some irony in comparing this to cancer as they have opposite connotations, they both show the concept of unchecked growth in a unique way. They also possess a strong juxtaposition of outcomes. While cancer isusually considered a negative outcome, unlimited love and personal growth can only lead to increased happiness and fulfillment.

Thompson, Noelle. (2020, November 19). What Happens When Mitosis Goes Wrong and in Which Phase Will It Go Wrong?. sciencing.com. Retrieved from https://sciencing.com/happens-mitosis-goes-wrong-phase-wrong-8723.html