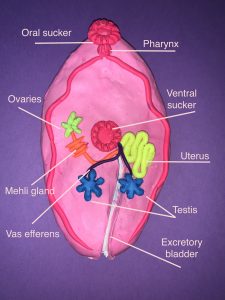 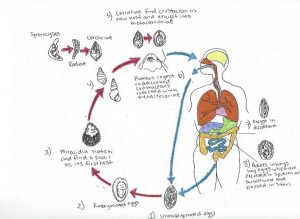 Paragonimus westermani is a species of lung fluke acquired by a food-borne parasitic infection. P. westermani can cause a severe and fatal infection if left misdiagnosed and untreated. P. westermani is also known as the Japanese lung fluke or oriental lung fluke because infections are endemic in eastern Asia, but also common in Africa and South America.
According to the CDC website, the parasite has a life cycle that includes two intermediate hosts and a final mammalian host. The eggs of P. westermani are excreted unembryonated in sputum, swallowed, or passed with stool. In an external environment, the eggs become embryonated, then miracidia enter its first host, a snail, by entering its soft tissue where the miracidia will go through three developmental stages; sporocysts, rediae, and cercariae. Once a cercariae leaves the snail and finds its second host, a crustacean, it will encyst and become a metacercariae. Humans become infected after ingesting undercooked or pickled crustaceans such as crab or crayfish that carry the metacercariae. The metacercariae hatch in the duodenum in the small intestine where they penetrate the intestinal wall and enter the peritoneum, then they continue to penetrate into the diaphragm and into the lungs, encapsulate themselves, and finally develop into mature adult flukes. Lung flukes can also penetrate into other organs such as the brain and liver to lay eggs, however, the eggs cannot complete their full life cycle because there is nowhere for the eggs to be released. Adult flukes range from 7.5 to 12mm by 4 to 6 mm in size and the time from infection to oviposition is 65 to 90 days. Humans can have an infection of P. westermani for up to 20 years. It can take one to two months or even longer for the infected person to experience any symptoms. Symptoms of infection from P. westermani can range from an acute cough, itching, diarrhea, abdominal pain, chest pain, discomfort, difficulty breathing, blood-tinged sputum and a low-grade fever. Lung flukes can eventually cause pulmonary abnormalities that mimic other conditions and diseases such as bronchitis, tuberculosis, and lung cancer. This causes P. westermani to be commonly misdiagnosed, especially in America where the infection is uncommon. Due to this reason, the infection is usually diagnosed by the identification of eggs found in sputum or stool samples, and antibody tests. In the article, “ Chest CT Features of North American Paragonimiasis’ Henry, et al., diagnostic tools such as chest x-rays and CT scans can clearly depict the damage caused by lung flukes such as pleural effusion; a build-up of excess fluid between the layers of the pleura outside of the lungs, inflammation, pleural thickening; leaving stripes thicker than 1mm, and pulmonary nodules; lesions and growth on the lungs made by tracks from the worm burrowing a tunnel.
According to the article “Pleural fluid characteristics of pleuropulmonary paragonimiasis masquerading as pleural tuberculosis’ by Hwang, et al., chest radiographs in patients with lung fluke infections commonly revealed low glucose levels, high LDH levels, cystic lesions, ground-glass opacities; lesions typically associated with lung cancer, and air-space consolidation from pulmonary edema caused by fluids such as pus, blood, or water build up, decreasing the rate of diffusion and affecting the lung’s ability to reach total lung capacity.