This is my STEAM project

I’ve assembled thin tubing, as if it were the filtration of air within some contraption, to represent the lymphatic system moving lymph through its tiny lymph vessels. I’ve added a T divider to help represent a filter or a lymph node. From one end of the T divider, the pathway continues to cycle within the mainline, like in the lymphatic system, but the other end is the pathway to the dust collector, which would be emptied when full. I used fish food to represent the “dust” which in turn represents whats left of bacteria when the white blood cells are done with them. Just as within the lymphatic system lymph nodes filter the lymph then what’s remaining ends up going to the urinary bladder which is later excreted from the body. Thus ending the filtration of the air in my representation as well as lymph in the human body. 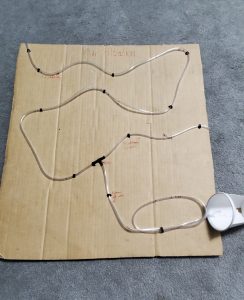