For my steam project, I decided to touch on a common disorder during pregnancy and it’s cause. I chose Gestational Diabetes, which is a condition that can happen during pregnancy when your blood sugar levels become too high. It’s a pretty common condition diagnosed as it affects up to 10% of women. In my drawing that I created, is a detailed picture of how a normal pancreas works versus how a diabetic pancreas may function. You can see in the normal pancreas, it provides enough insulin for the body. And in the diabetic pancreas, the insulin isn’t being released nearly as much. 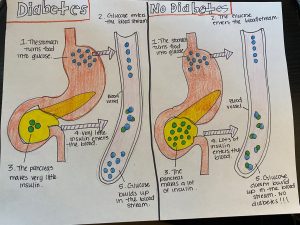