The objective I covered for my steam project is to “identify the key components and various structures of the nervous system.” I will be focusing mostly on the brain and the structure and function of neurons specifically. To cover this objective I decided to use multiple sclerosis and how it damages neurons and the brain. The visual aid portion of this project is a less literal interpretation of MS and how it affects the nervous system.

I wanted the artwork to be a less literal interpretation of MS. Because the nervous system functions sort of like a computer, I wanted to compare the frustrations of dealing with MS to the frustrations of dealing with an old computer. The frayed wire is there to represent how MS damages the myelin sheath on the axon of neurons. The background of the computer is nervous tissue and the brain to help draw parallels between the functions of a computer and the functions of the nervous system. The computer pictured is such an old computer because it will inevitably be slow, and there isn’t much you can do to speed up an old computer. This is much like the cognitive dysfunction caused by MS. MS-related cognitive dysfunction is caused by lesions or “black holes” in the brain. The black holes are areas of permanent axonal damage in the nervous tissue of the brain. And much like the old computer, there isn’t much you can do once the damage is done. 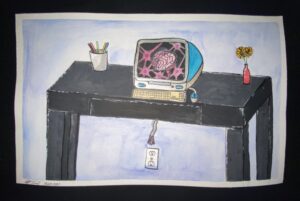