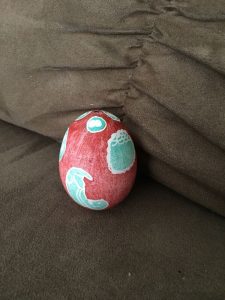 I created a model of fetal development through wax and dye on an egg. The top of the egg cycles through the beginning stages of pregnancy from a fertilized egg through a 2 and 4 cell stage to a 16-cell stage. The second cycle on the egg shows the development of the blastocyst and the final cycle shows the fetus from week 4 to week 20. This represents a normal pregnancy. I also separated these stages in order to compare a normal pregnancy to an ectopic pregnancy. An ectopic pregnancy typically lasts until around week 6 to 8 until it could become fatal to a mother.  This would be at the beginning of the second cycle shown on the egg. I made this distinction between the different levels (from top to bottom on the egg) to show that an ectopic pregnancy would not make it to the third level.