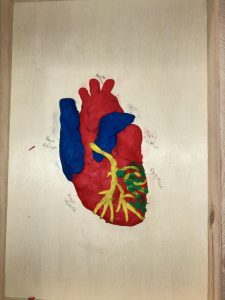 For my project I created a clay model of the heart and showing the location of a blockage in the left descending coronary artery. I showed how one blockage in the major artery can quickly cause tissue death, and how significant the damage can be in a short amount of time.

Pain in the….Chest? The Myocardial Infarction

You hear it all the time. Just watch any episode of Grey’s Anatomy and you will hear at least one person complain of chest pain. So why does everyone panic, even in a real life emergency room, when they hear the words “chest pain”? This is because of a life-threatening situation called a myocardial infarction. A myocardial infarction is what you might know as a heart attack, because it is quite literally an “attack” on muscles of the heart, as they die from the lack of blood and oxygen. It is one of the top killers in the United States.

The heart is arguably one of the most important organs in the body. It is the center of our circulatory system. Located in the thoracic cavity, in between the lungs and encapsulated in a membrane sac called the pericardial sac. The heart contains four chambers, right and left atrium and the right and left ventricles. These four chambers pump around 70mL of blood with each contraction of the heart. To supply all of those pumping muscles, the coronary arteries supply blood to the myocardium. Because these arteries are so essential to keeping our heart functional, it is a very serious situation when one of them becomes compromised.

A myocardial infarction occurs when plaque builds up or a clot obstructs one of these arteries, starving the muscle of blood and oxygen, leading to very quick death of the tissues. These blockages can happen over time, usually called angina, which is a partial blockage of the vessel, though blood can still flow through(2). Obstruction can also occur suddenly, from a sudden blood clot clogging the artery and quickly damaging the heart. A lot of risk factors can increase the chances of a heart attack such as obesity, cigarettes, high blood pressure and diabetes. The population with the greatest risk is the middle aged male. In fact it is one of the highest killers among males in the United States. One reason why middle aged women are on a much lower end of the risk scale is because of our hormone estrogen, which is believed to offer some protection against blood clots(3). Nonetheless, this condition is very serious and life threatening. This is why if you ever check into a hospital with chest pains, along with other symptoms such as sweaty, difficulty breathing, or pain in your jaw or arm, you will likely be rushed in. Because time is the enemy in these situations.

The most common location of these blockages are in the left anterior descending artery. In health care, we refer to this as a ST-elevated myocardial infarction(STEMI)(4). This is because when we take an electrocardiogram (EKG or ECG), the ST portion, which is normally flat on a normal sinus EKG, appears more elevated. In order to treat this, drugs called “anticoagulants” are used, because of their ability to break up clots, and prevent more from forming. The next step is to feed a catheter into a major artery and place a metal, cage-like device that returns blood flow through the blocked vessel, in hopes that it can save some of the tissue. Unfortunately, it is most common to see significant damage to the muscle, because of how quickly the myocardial muscles die when starved of oxygen.

Time is the most important factor, because myocardial infarctions can be very deadly, very quickly, and almost always cause permanent damage. This is why it is important to know and recognize the symptoms so you can get treated as fast as possible. Healthcare is constantly working on new ways to shorten time between entering the hospital, and receiving treatment. These key elements are what will save future lives.