Comic Strip on Addison’s Disease, the affect it has on the endocrine system, signs/symptoms, and treatments. 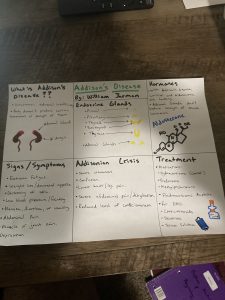 I was excited and overwhelmed for this semester’s STEAM project for a variety of reasons. Many of the units covered in the second part of the two semester, human anatomy and physiology course interested me and were pertinent to my career field. These units consisted of the endocrine system, cardiac/circulatory system, and the respiratory system. I decided to dive into the endocrine system to search for a STEAM project for a variety of reasons. The first reason is due to the fact that I am the least familiar with this anatomical system. The second reason is because of a patient I encountered at my work a few summers ago. I decided to draw a comic on Addison’s Disease to illustrate how the disease works and show a treatment plan.

Two summers ago I was a newly certified medic, working at a fire department on the westside of Fairbanks, Alaska. Our company was dispatched to a hotel for a female complaining of difficulty breathing (a fairly routine advanced life support call out). Upon arrival at our patients room I immediately noticed that the patient was in extreme distress. Green sputum was coming from the patient’s mouth and the patient was in extreme respiratory distress. Over the course of the incident I quickly ruled out a variety of medical emergencies pertaining to the respiratory system; airway obstruction, COPD, anaphylaxis, asthma, CHF, overdose, and anxiety attack. Little did I know at the time but my patient was having an adrenal crisis. With the patient being alone and having difficulty speaking due to respiratory distress, it was hard to obtain an accurate medical history. We were eventually able to figure out that our patient had a rare condition called Addison’s Disease. This was found through a medical bracelet on the patient’s wrist. From here we contacted medical control and administered the patients medication (Solu-Cortef) via IV access. Between supportive airway interventions and medication administration, the patient quickly stabilized and was transported to the emergency room. From this moment on I was fascinated with Addison’s Disease and the effect it had on the human body.

Addison’s Disease is a unique condition that affects the adrenal glands, one of many glands within the endocrine gland family. Addison’s disease can affect all sexes and all races. It usually has a slower onset that is first caught by symptoms, and then can be diagnosed through labs and tests at the hospital. While there are different types of Addison’s Disease, all variations share the same root problem. This problem is the fact that the adrenal glands have an insufficiency in creating vital hormones. Cortisol and aldosterone are two hormones that the adrenal glands don’t produce in the case of Addison’s Disease. Cortisol affects metabolism, blood sugar levels, inflammation, and the salt-water balance affecting blood pressure. Aldosterone also affects blood pressure, blood volume, and the salt-water balance within the body. For initial symptoms the patient may experience abdominal pain, weight loss, darkening of skin, low blood pressure, fainting, nausea/vomiting, joint/muscle pain, or depression. An adrenal crisis is a medical emergency, during this the patient may experience severe weakness, altered level of consciousness, severe abdominal pain, and hypotension. Respiratory distress can also come into play due to hypocortisolism.