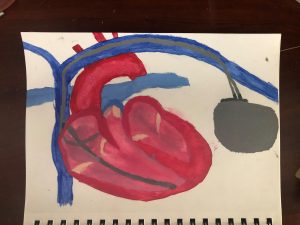 The heart is a involuntary muscle that contracts on its own by and electrical impulse. The hearts internal battery so to speak is the sinus node that is located in the right atrium. There are four chambers of the heart where blood is pumped to two different places. Blood flows into the heart via the Superior vena cava which is located on the upper right-hand side of the heart. The blood then enters the right atrium, the SA node will then start the electrical pulse around the wall of the right atrium where it will meet the AV node that is located directly above the tricuspid valve. When the electrical pulse is sent it will contract the sounding muscle creating a high-pressure environment for the blood that will force the blood into the right ventricle which is a less pressure environment. This does not end the cycle of course the electrical current goes from the AV node to the bundle of HIS which is in between the two ventricles and at the apex of the heart the bundles of HIS split into two and travel up the outside of the walls of the ventricles. With this being said the blood in the right ventricle will receive the electrical current causing the muscles of the ventricles to contract again creating a high-pressure environment allowing the blood to be pumped through the pulmonary valve and into the pulmonary artery. Off the blood goes to be oxygenated by the lungs! However, it will not be missed because it then comes back to the heart from the Pulmonary vein into the left atrium where you guessed it the SA node will start the contraction by firing the electrical current. But what happens when the SA node for some reason stops working. Death… Death is what occurs.

The human evolution and the advances in medicine will not stand for it, well if they can help it. The heart can be tricky sometimes. Arrhythmia’s do occur in some people whether it is due to an underlying medical condition, a new injury, or just congenital from birth. Bradycardia, however, is life treating not saying the rest of arrhythmia’s are not life treating. If there is a weak heartbeat, then there runs the risk of organs not getting enough or any oxygen rich blood. The fix would be a cardiac pacemaker. This is a machine that is inserted into the chest that contains a wire going through the superior vena cava and into the right atrium. There are three different types of pacemakers they all travel through the vena cava but, the difference lies in where else the additional wires are placed. The single chamber pacemaker is the previously stated, then there is a dual chamber which has one in the right atrium and one in the right ventricle, the last on is biventricular which is only in the two ventricles.

The pacemaker is able to regulate the heartbeat and automatically know when the bradycardia occurs and is critical level which is set by your cardiologist. When the machine recognizes the slow or nonexcited heartbeat it send the electrical shock to the area of the heart it is in. This does occur without warning to patient. This essentially restarts the heart just like an AED would!