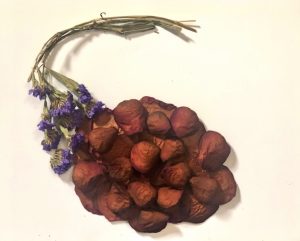 This project aims to give basic information about Polycystic Ovary Syndrome (PCOS). This includes the causes, symptoms, treatment, how it forms in the body, and some circumstances if this won’t be treated right away. The researcher’s main goal is to have a deeper understanding about Polycystic Ovary Syndrome, that might help in promoting a healthier body. Above is an illustration of a polycystic ovary with dried flowers. It shows the cysts and how damaged the ovary is. The imbalance of hormone levels in a woman’s body causes the cysts to form. The cysts are like tiny, fluid-filled balloons in the ovary.

Based on an article written by Robin Berzin, an internal medicine physician, PCOS is estimated to affect in 1 to 10 women of childbearing age. This makes PCOS as one of the most causes of infertility. PCOS is not a disease but rather a set of symptoms that can be present together. Doctors don’t know all of the reasons why some women get PCOS, the research for this is still ongoing. Yet, you might be more likely to have PCOS if your sister or mother also has it. It could also be related to problems that make your body produce too much insulin. This is a hormone that controls how the food we eat is changed to energy. Insulin Resistance is when the body’s cells do not respond normally to insulin. This caused our insulin blood levels to become higher than normal. Many women with PCOS are insulin resistant, especially to those who are overweight, have unhealthy eating habits, and doesn’t get involved with physical activity. Another factor is a high level of androgens. This hormone controls the development of mail traits. And women that has PCOS have more androgens than normal, this prevents the ovaries from releasing an egg during menstrual cycle and can cause extra hair growth and acne.

There is no single test to diagnose PCOS. Yet, physical examination, pelvic exam and ultrasound, blood tests could help in diagnosing PCOS. Also, there are some other symptoms that are considered in identifying if someone has PCOS. It could be irregular periods, extra hair growth on face, chin, and body, acne, weight gain, and thinning of scalp hair. As well as multiple cysts on one or both ovaries. Also, PCOS could also affect pregnancy by miscarriage, gestational diabetes, and preeclampsia.

There is still no cure for PCOS. Yet, health professionals will work on a treatment plan based on the symptoms that the patient is experiencing. They would use hormonal birth control, anti-androgen medicines, and metformin.

As we all know, our reproductive system has two functions–to produce egg cells, and to protect and nourish the offspring until birth. If a woman has Polycystic Ovary Syndrome, it might be difficult for her to bear a child or worse, it might hinder the body’s ability to ovulate, conceive or carry an infant to term.