I expanded on the objectives focusing around how lactation is induced and maintained as well as the benefits to breastfeeding.

When mothers aren’t able to breast feed there can be a few things that are causing this problem, from latching issues to a poor milk supply. A poor milk supply can be caused by a lack of glandular tissue, this is called breast hypoplasia. Breast hypoplasia is characterized as having insufficient glandular tissue development, making it very difficult for mothers to breast feed. Some signs or symptoms of this condition are asymmetry, more than 4cm of flat space between breasts, overly large and bulbous areolae, tubular shaped breasts, and lack of breast changes during pregnancy (Arbour et. al, 2013). When a mother has hypoplasia, she can produce milk, but it is not a high enough volume to provide for her baby. Mothers who suffer from this condition may be given galactagogue, a medication or natural herb to help increase milk volume. A good example of one is fenugreek, an herb/spice that is used all around the world and has been known medicinally to stimulate milk production (Bazzano et. al, 2013). The cause of this condition is not known, but it is theorized that childhood radiation exposure may play a role as well as genetic predisposition (Arbour et. al, 2013). 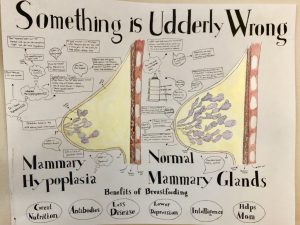