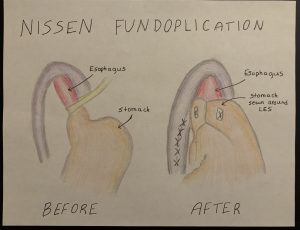 I did my project on GERD and a surgical procedure that is used as a common treatment option for it. In my drawing, the first illustration represents what the stomach and esophagus look like before. Here, the esophagus is on its own. In GERD, the lower esophageal sphincter isn’t functioning correctly, causing a back flow of food from the stomach. The second image shows what it looks like after the procedure. The stomach is wrapped around the lower portion of the esophagus and sewn shut, thus stabilizing the LES.