The location in which is affected determines the type of Crohn’s disease you have, and these types are leitis where Crohn’s disease affects your ileum, ileocolitis where it affects the colon and terminal ileum, gastroduodenal where Crohn’s disease affects the duodenum of the small intestine, Jejunoileitis where the parts in the jejunum are affected, and Crohn’s colitis where only the colon is affected.  Symptoms commonly include but are not limited to diarrhea, fever, fatigue, weight loss, and abdominal cramps.  Since Crohn’s disease causes an over-adaptive immune system, not only does in cause inflammation but people with Crohn’s disease are more likely to develop infections in the intestine due to a weaker immune system.  Crohn’s disease can usually be diagnosed through blood tests, endoscopy, tissue samples, or stool tests.  A colonoscopy is a type of endoscopy that allows the visualization of the colon by using a scope with a camera on the tip that is placed into the anus.  The doctor can also go through the mouth and down through the esophagus and into the stomach.  This procedure is called an upper endoscopy and can actually move down into the duodenum.

Crohn’s disease cannot be cured but can easily be managed through treatments like taking certain medications or bowel rest. There are various anti-inflammatory medications that calm the immune system to slow or stop inflammation from occurring. Since they slow the immune system, the medications can further increase susceptibility to intestinal infections on top of the already weakened immune system. If the symptoms are severe enough where other options are not effective, surgery is an option to decrease symptoms. There are different types of surgeries that will help depending on the location of the crohn’s and the issues you are having.  Strictureplasty is where the narrowed portion of your intestine is cut and sewn to widen the pathway, this is preferred over a proctocolectomy or colectomy which involve the surgical removal of the colon (colectomy) or the removal of colon and rectum (proctocolectomy). 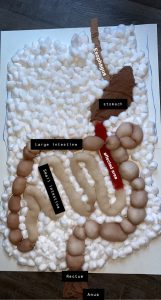