My STEAM project is about the differences and similarities between the central nervous system (CNS) and the peripheral nervous system (PNS).  In my essay, I placed a focus on amyotrophic lateral sclerosis (ALS) and how it differs from Guillen barre syndrome (GBS).  The end-state of my analysis is to show how ALS is commonly mistaken for GBS however one disease is a CNS disorder where as the other is a PNS disorder. 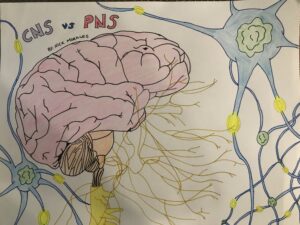